A Race To Remember 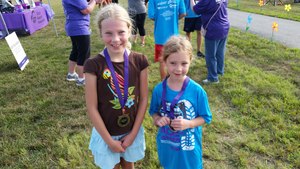 Naomi, Phoebe, and Daddy participated in a 5k race called "A Race to Remember" that was sponsored by the Alzheimer's Association. Back in the Spring when looking for a 5K to participate in, we came across hearing about this race which seemed a great fit. First, I wanted to participate because my Grandma (aka Grandma the Great) had passed away in January after suffering from dementia for a number of years and wanted to run in this race in honor of her. For Naomi, it was another chance to do another race at age 8 (this time in weather above 32 degrees). To my surprise, Phoebe who turned 6 was ready to participate in her first 5k!

Naomi finished her race in 34:29. This was about 10 minutes faster than her 1st 5K in November last year doing the Turkey Trot! The 5k course design was an out and back. Naomi took off while I stayed behind running with Phoebe at her pace. It was exciting to see Naomi around her 2-mile mark heading back to the direction of the finish while Phoebe and I were still making our way to the midway part of the race before we turned around. I gave her a high 5 and told her to keep going!

Phoebe finished her race in 54:36. To Phoebe's credit, we really did not get as much training as we should have. We had completed about 6 runs around 1.5 to 2 miles each to prepare. Never the less, she was certainly doing everything she could to finish her at the pace she could best handle. I had to encourage her most of the way. The most exciting was the very finish of the race where we saw so many volunteers and runners seeing us run together cheering us on! Mommy and Rachel were also there at the finish line too along with Naomi who already finished her race.

Naomi and Phoebe won 1st place in their age categories! It was exciting to see them get medals and I am so proud of them. We are not sure when our next race will be but it will be exciting to see how their journey goes from here.

This race was for you Grandma! We love you and miss you dearly! 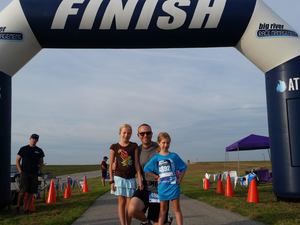